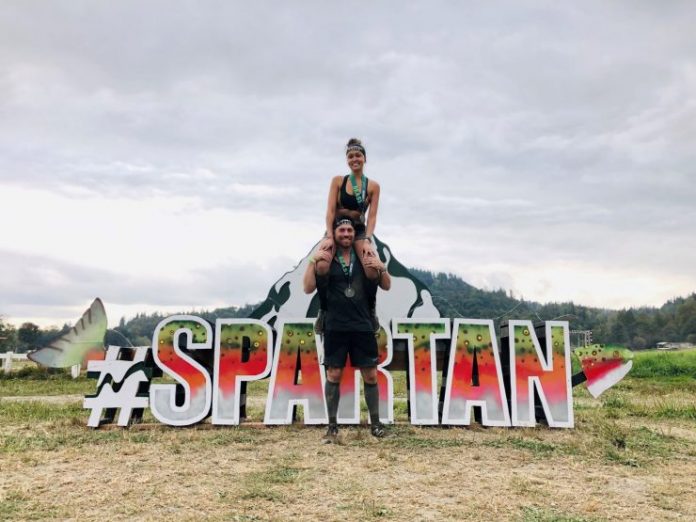 Well, we did it again. For the second year in a row, my wife Alexandra and I ran a Spartan Beast on our anniversary. Having so much fun last year running the Chicago Beast in Attica, IN on our first anniversary, after the long grueling thirteen miles and thirty plus obstacles in the rain, we said we would never do a Beast again. But just two weeks later, we participated in the Chicago Stadion race at Toyota Park in Bridgeview, IL, where of course, there was a flash blizzard that Sunday in October. After surviving that, we decided that we could pretty much do anything, so we began to plan our next Beast for our second anniversary this year. And as 2018 came to an end, we continued to look and see where the Spartan race was coming to next and what would make sense for our next trip and race. Sometime this past July, we decided on doing the Seattle Beast in Snohomish, WA, which also fell on the day before our anniversary. How does this company keep ours and millions of other Spartan fanatics interest so much because when you are knee deep in mud, literally, and you don’t think you can move anymore, once you are finished and get your medal, you immediately want to do another one.

Jonathan Fine, Head of Global Communications for Spartan, explains that these events are not just a one-day race but a way of life for many. “The whole reason that Joe created Spartan was to help people get in shape,” explained Fine. “So, you can’t just go from 0-100. That’s the reason we have the different race lengths.” And as many obstacle course race runners probably know by this point that another OCR organization, The Warrior Dash, had to close their doors after ten years in the game, Spartan knew that had to do something to help those that had signed up for upcoming WD events. “We knew there would be thousands of people kind of just stranded without a race,” said Fine. “Warrior Dash, like Spartan, has a very passionate community. There are people that want to race, that are training for their race, a lot of them are doing it to get in shape, they have that goal in mind and them closing throws a wrench in their goal.” So, the Spartan company decided to offer a race as one they could do so they still had a race to look forward to. They offered a free race to anyone that registered for an event that hadn’t happened yet but also said that this would also affect races that are going to happen next year because these runners would be without a home. So, going above and beyond, which the company is known for, said anyone that had raced in a Warrior Dash event over the last ten years can also get a free Spartan race. “It gives them something to train for, look forward to, and introduces them to a different brand.” said Fine.

With options like the Sprint being about a three-mile race, the Super about eight to ten miles and the Beast being clocked in at just over thirteen miles, all these races come with anywhere between twenty to thirty obstacles scattered all throughout the course. And within the last few years the company has added different events to please even more people that may be interested in doing one of these. “We also have, from an OCR standpoint, the entry level race the Stadion Series,” said Fine. “Those are like right in the city center with a younger audience. No mud or barbed wire but you have the appeal of getting behind the scenes of the football stadium or ballpark.” The Spartan will travel to Wrigley Field in Chicago, AT&T Stadium in Texas, and Fenway Park in Boston, just to name a few to close out 2019. And in addition to that, the brand debuted their Trail Run Series this year and has already seen much success with it. “It actually gone really well for us,” stated Fine. “After opening registration, we realized it was going to be a success. We are talking now about how we can improve it for 2020. We’ve sold out or come close to selling out all of the trail races. Its introducing trail runners to obstacle course races and introducing obstacle course runners to trail running. It was sort of a natural fit.”

Along with adding the trail element to their list of events to choose from and partnering with 24 Hour Fitness this year, what sets aside Spartan from the rest of the OCR world is brand recognition. “One of the things that has built us and fueled us is that we are an obstacle course company, but even from the beginning, we are more of a lifestyle,” explained Fine. “We have a founder of Spartan write books on how to better yourself, kind of like a self- help book, and then we have different partnerships like the one with CRAFT, an OCR specific gear. Before we partnered with them nobody had really created a high-performance line that was specifically designed for obstacle course racing. The partnership helped us to create a merchandise category for the brand and we just launched the first Spartan cross training shoe.”

As you read this, you may be thinking a few different things. Why is running a Spartan or any OCR run that big of a deal. Or maybe you are thinking, this all sounds pretty fun, but I could never do something like that. And I think that’s the best part of being part of the Spartan community. Once you get to the actual event, you look around and see people of all shapes and sizes, all ages groups and different ethnicities and see and feel that the positivity level is through the roof. When standing at the start line with our 12pm group ready to begin our race, the announcer took time out before the race to ask if anyone was celebrating anything, like a birthday or anniversary. And we were so we cheered and raised our hand. He came over and over the loudspeaker began asking me trivia questions about my wife just to make sure I knew my facts about her on our anniversary. This made running the race even more special for us. And a few days later on a Spartan community fan page, someone recognized our picture and made the comment that they remembered us from that specific thing. That’s what it’s all about and that’s the Spartan brand. From welcoming participants from rival companies free of charge into their races when a company closes, to offering more than just a race to current and future Spartans, the Spartan brand wants to provide a full entertainment event that whether you run one or one-hundred of them, you will remember it for a lifetime. And if you pick a Spartan Beast to participate in this time next year, you may just see my wife and I there celebrating our third anniversary and battling the course for our third Spartan Beast medal!

For more information or to sign up for a Spartan event visit, www.spartan.com