Riding a four fight win streak and taking home Fight of the Night honors in his last three fights, UFC featherweight fighter, Cub Swanson was looking for a fifth win against rising star, Brian Ortega last December. That could have set up a title fight for Swanson but the MMA God’s had other plans for Swanson that cold winter night and Ortega ended up stopping him in the first round putting a halt to his four fight win streak. “I felt like I was in control of the fight and I knew he was dangerous with his grappling,” said Swanson. “Looking back, I thought I did really well. I just made a couple mistakes and had I not made those mistakes I would have won for sure.”

Swanson’s run at the title may still have some steam but to keep it going he will have to get through former UFC lightweight champion, Frankie Edgar tonight in the co- main event of UFC Fight Night: Barboza vs Lee on FS1. They first fought back in 2014 with Edgar coming out with the win. “He really wasn’t on my radar as far as thinking I was going to fight him right away,” said Edgar. “There were just so many other guys that I’ve lost to in the past that I thought would happen first but I definitely always wanted this one back and I’ve learned a lot since fighting him.”

It’s been six weeks since Edgar suffered a devastating knockout at the hands of Brian Ortega and many were surprised with the quick turnaround for him to take this fight. Everyone but Swanson. “You really have to look at it from the fighter’s perspective and that’s the way I saw it,” explained Swanson. “At first I was like, ‘oh he just fought’, but at the same time if you are a fighter and you feel like you are one of the best in the world and you got caught and feel it’s a mistake, you want to get back in there and make it right. It didn’t surprise me to much that he wanted to get back in there and whether that was smart or not, that’s on him. I just gotta go out there and do my thing.”

Tune into a Cub Swanson fight and you are most likely in for a back and forth winner-take-all battle. “I just fight the way I fight,” explained Swanson. I have a game plan and just give myself some parameters and besides that I try to be free and let loose and depending on my opponent is how creative I can be. I don’t put any pressure on myself to perform because it’s just the way I fight.” He also realizes that he needs to keep up this pace due to the fact that his division is chock- full of talent and doesn’t seem to be getting any easier the older he gets. “As far as our division being stacked just look at all the top guys,” said Swanson. “No ones really retired, no ones gone anywhere and we have all these up and comers coming up it just keeps getting better and better.”

For Swanson, his rematch against Edgar is so much more than just getting a win back. It’s a fight where he gets to show his evolution in the sport that has changed so much since he made his debut over a decade ago. “To me its still martial arts and I got into this sport to be a better person and I feel like its made me one and I’m very proud of that,” explained Swanson. “Mentally thinking I was done with the UFC and being a free agent and then coming back and getting a fight so quickly, its been a blessing and I’m just excited for the future from here on out.” 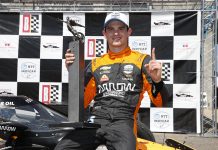