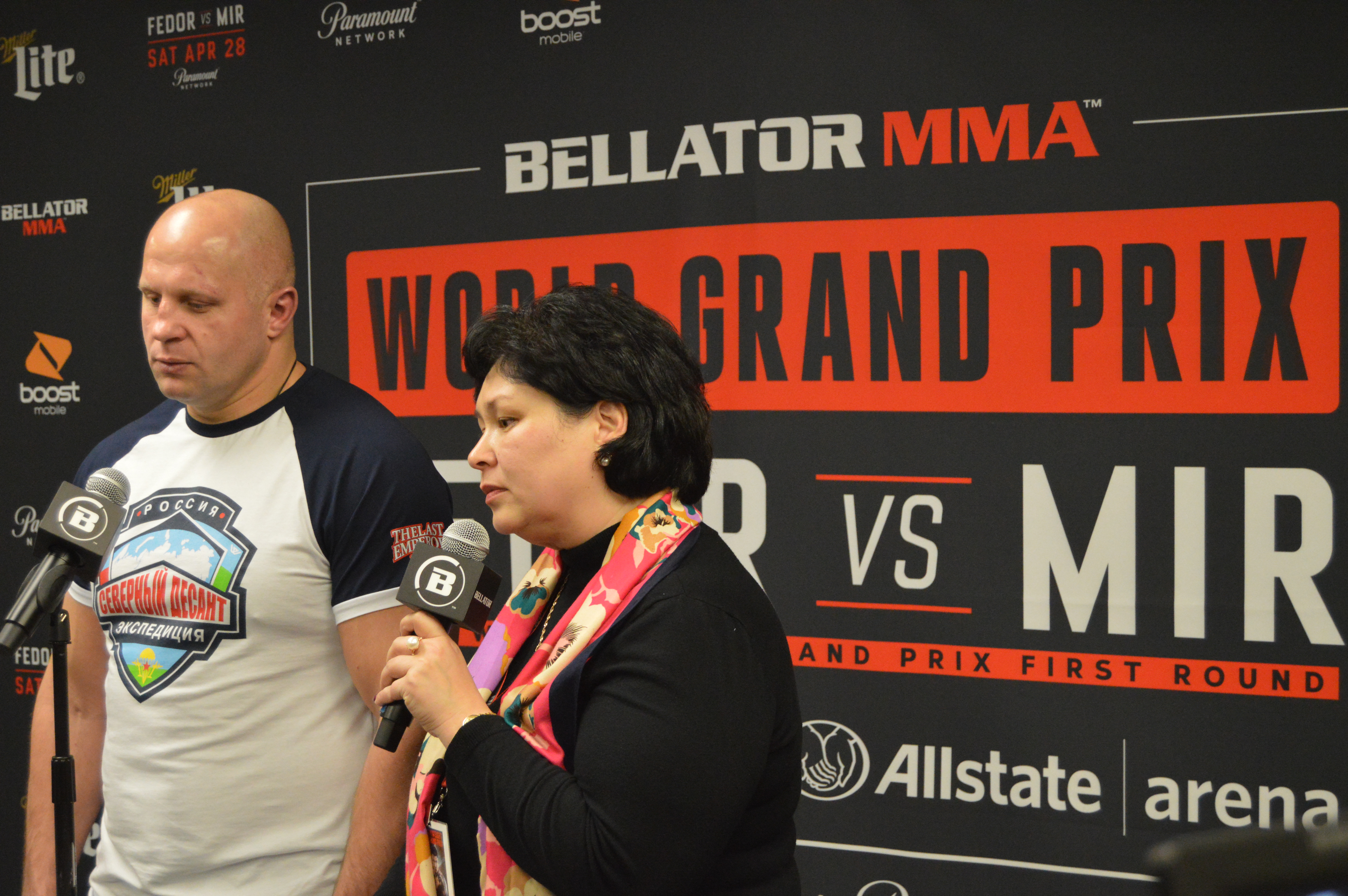 !Viva Jiu-Jitsu! That’s what Bellator featherweight fighter Emmanuel Sanchez yelled after his win this past weekend at Bellator 198: Fedor vs. Mir. A packed Allstate Arena in Rosemont, IL were treated to a submission clinic as four of the five fights on the main card, one including Sanchez, ended with someone tapping out. “It was like a jiu-jitsu night tonight,” said Bellator President Scott Coker. “You go back to the core principles of martial arts and the core principles of MMA and jiu-jitsu is you better have a good Jiu jitsu game and if you don’t you saw what happened out their tonight.”

And not only did Sanchez display his high level submission grappling skills on Saturday night, he also put himself next in line to face the winner of Patricio Pitbull and Daniel Weichel after they fight in July at Bellator: Rome. “He is great talent,” said Coker of Sanchez. “He always brings it. He always talks a big game and he always backs it up.”

But aside from all the great ground game that was on display, it was obvious by the thunderous ovation of the near sold out crowd that they were there to see MMA legend, Fedor Emelianenko fight former UFC heavyweight champion Frank Mir. The two were the main event of the evening and are also a part of Bellator’s Heavyweight Grand Prix Tournament. Fedor would go on to stop Mir early in the first round after landing an uppercut dropping Mir as he executed a few more heavy shots to Mir forcing the ref to jump in and stop the fight. “The fight went the way I planned it,” said Fedor. He will now face Chael Sonnen in the next round of the tournament later this year. “To tell you the truth, I believe that Chael is a good person,” explained Fedor. “But in public, his behavior is kind of challenging. But that’s the way of attracting extra attention to the fights and his performances.”

It was also a big night for Conor McGregor teammate, Dillon Danis, who is known for his elite ground game skills but had yet to make his mark in MMA. “I said I would finish him in the first round and I did,” said Danis. The SGB team member took a few hard shots in the first few seconds of the fight but was able to secure a slick toe hold submission for the win a just a minute later. “Dillon’s got a little swagger to him,” said Coker. “And to me if that’s what you want to do and play that role, that fine. He’ll have an opportunity to flourish and grow his brand.”

And the two other fights on the card, Rafael Lovato Jr and Neiman Gracie, nephew of legend Renzo Gracie, did not disappoint either as both snagged early submission wins over Gerald Harris and Javier Torres respectably. “I was very relaxed out there,” said Gracie. “I was happy it went to the second round so I can get in more cage time.” And Lovato’s win this past Saturday night, a fight that almost didn’t happen due to his original opponent having to pull out earlier in the week, showed that he is ready for a title shot sooner than later. “I can pretty much throw whatever I want and not be afraid of a take down, “explained Lovato. “If they engage with me on the ground I’m very confident that I can make something happen. That’s just all the years of jiu-jitsu paying off.”

A submission stacked night wouldn’t be complete without some closing words from the legend that started it all, Royce Gracie. “Tomorrow, a lot of the stand -up fighters are going to say the rule favored the grapplers,” explained Gracie. But then next week, everyone gets knocked out the grapplers are going to say the rules favor the stand- up guys. The rules don’t change. It’s a question of strategy. Tonight, the guys used a good strategy.”