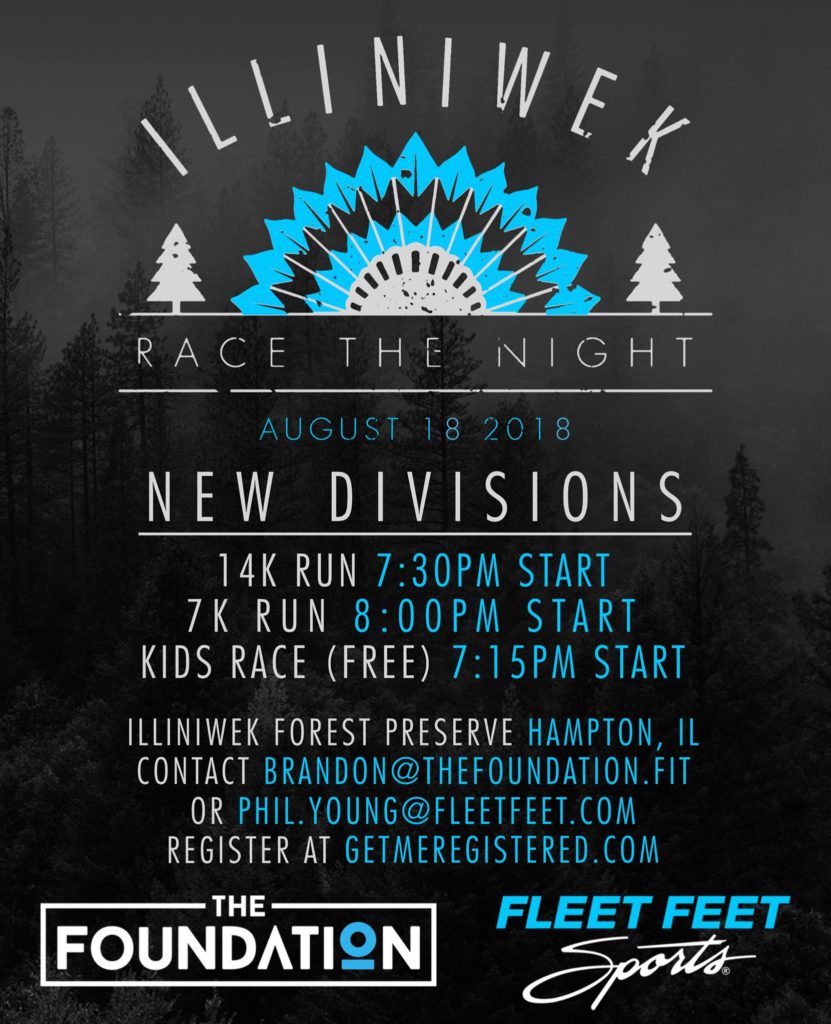 You know when Fleet Feet Sports Davenport owner Phil Young and co-owner of The Foundation (formerly Quad City CrossFit) Brandon Bartz sit together and brainstorm, something fun is going to come out of that conversation. And last year something did as the Illiniwek: Race the Night trail race was born.

On Saturday, August 18th, the 2nd Annual Illiniwek: Race the Night 7K/14K trail race is back and its bringing a few improvements with it this time around. “We’re going to do a couple things different,” explained Young. “Last year there was just a 7K which is just under 4 miles and its one big loop of the grounds and this year we are offering a 14K option that will start first so it will start in the light, so that will be kind of fun to do your first loop in the light and you’re second in the dark.”

The second big change to this year’s race is that there will also be a kid’s ½ mile fun run as Young wants this to be a family friendly event so that everyone of all ages can enjoy the park. “We are also doing kids run which will be pretty simple and contained and parents will be able to see what’s happening, “said Young. A lot of people haven’t been out to Illiniwek. That was another reason to show off our natural resources and bring people together to do something fun and keep people active. We wanted to get families involved and bring their kids out to run in the grass.”

For some, this may be their first time participating in a trail race and it even may be their first time off the roads and on a trail in general. And Young wants to let everyone know that it is quite different than your average run and it actually growing in popularity in the nation. “Trail running is the only segment of running that is growing now,” said Young. “There is a lot against you with the hills and the race being at night, but it’s a non threatening thing. Time becomes a little less relevant and you can’t really perceive pace and effort.”

Young learned to run by watching the Bix and knows that our area is rich in running traditions and would like the Illiniwek: Race the Night run to become one of the many great races in the area and hopes that it will help preserve the running community for many years to come. “I think when you have events like the Quad Cities Marathon and the Bix, the (CASI) St. Patrick’s Day Race, the Turkey Trot and Run with Carl, these thousand person moments, they are bigger than just races,” said Young. “They are cultural moments. The running community here is established. Its old but it is young and vibrant and growing at the same time. There’s a movement of young people getting involved which is a group we are really excited about because if young people aren’t doing it, it’s got a shelf life and its going to stop.”