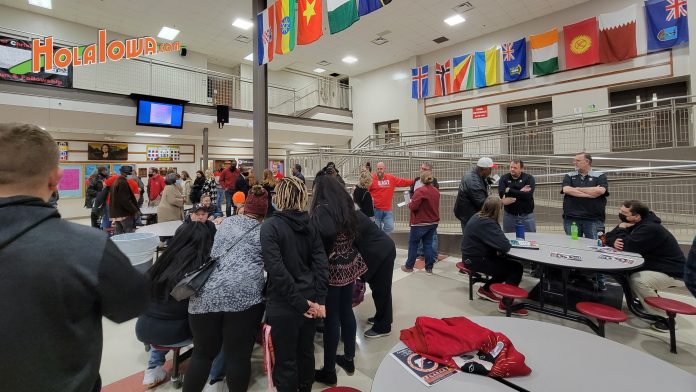 Community members from around East High School in Des Moines met Wednesday morning to decompress and support one another after the fatal shooting of 15-year-old Jose David Lopez on the school grounds Monday. The shooting also resulted in two East High students being hospitalized with critical injuries.

Over a breakfast of coffee and donuts at the school, they talked about what Iowa needs to do to make sure its students are safe. Democratic gubernatorial candidate and former East High basketball coach Deidre DeJear spoke with teachers.

“It was somber, but the folks were open. The teachers, the staff was open. I mean, they’re resilient. You know, I talked to one of the teachers and I’m like, ‘What do you need?’ He said: ‘I need for my students to be safe. Because if they’re safe, I’m good,'” DeJear told reporters outside after the breakfast.

DeJear, like many others, wore red—East High’s color—to show her support. She coached girls basketball at East High from 2009 to 2014. She dabbed at tears on her cheek as the wind blew her hair back outside of the school.

“Today I didn’t show up as a gubernatorial candidate,” she said. “I was just here a few weeks ago for a girls basketball practice. So I live right around the corner. I showed up here as an Iowan today because that’s what Iowans do.”

East High has canceled classes for the rest of the week and has a team of grief counselors available for its students and staff.

DeJear added the day was all about caring. She wasn’t surprised the community acted so quickly to come together to support one another. She said the next step is “putting pen to paper on how we resolve the challenges.”

“I want us to acknowledge what’s happened. I want us to mourn and to grieve for the losses. But I want us also to be empowered to figure out solutions to ensure that this doesn’t happen again. We, as a state, [have] always been innovative. And this is an opportunity for us to be proactive versus reactive,” DeJear said.

DeJear wrapped her arms around herself as she jogged to her next stop for the day. She was headed to Ames for her “Workday Wednesday” and possibly over to Altoona to meet with people dealing with a tornado aftermath. 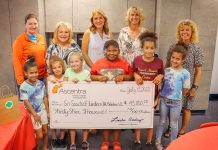