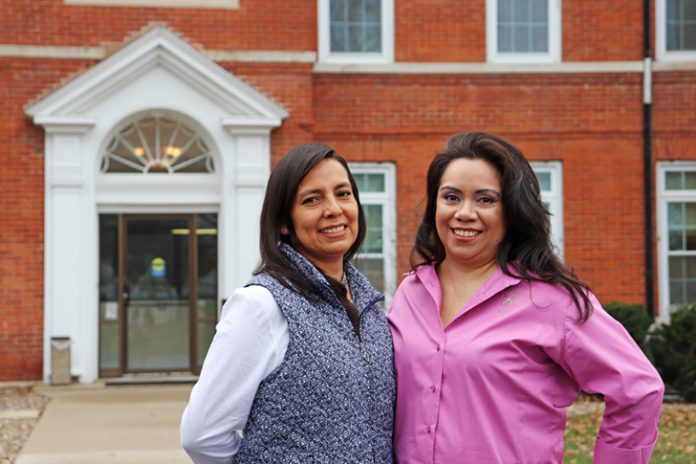 It is not easy to navigate immigration laws and rules. One simple mistake can disqualify the whole application. That is why it is important to have help from knowledgeable experts when dealing with immigration cases. The Diocese of Davenport offers a special immigration program where advice is given to clients by accredited well-informed staff.

The Diocesan Immigration Program provides help to families to go through the immigration process as successfully as possible. Among other services, they help with family petitions, adjustment of status, provisional waivers, citizenship, renewal of Legal Permanent Resident cards, work permits, DACA, and others. The only thing they cannot do is represent clients in immigration court.  On April 28, 1995, the Diocesan Immigration Program obtained accreditation by the Department of Justice.

“A condition of recognition by the Department of Justice to practice family immigration law is that our fees must be nominal,” Gricelda Garnica, one of the Immigration counselors from the program, explained. “While our fees help to maintain the program we also depend on donations from the diocese and others. We serve approximately 200 to 300 new clients per year.”

Simply put the Diocesan Immigration Program is an immigration legal office that specializes in family immigration law. Two counselors that provide legal advice are accredited by the Department of Justice. In addition, this program is part of the Catholic Legal Immigration Network.

“We are part of the Catholic Legal Immigration Network which gives us access to legal support and training to assure we are up to date with the now all too frequent changes in the rules,” Garnica made clear.

In addition to legal advice, recently, the Diocesan Immigration Program has also partnered with Ascentra Credit Union as part of the Newcomers Initiative. Immigration legal fees can run very high and many people do not have the savings to pay the fees, but thanks to this special partnership clients may be referred to Ascentra for special low-cost financing to help them pay the required fees.

“There’s instances where a client consults with an immigration services provider and once they asses the actual costs of their case, they have to wait until they save up the amount needed, or wait until tax return season to start their much needed case,” says Alvaro Macias, Vice President of Business Development for Ascentra.  “This is a way to help people proceed with their casework in a very affordable fashion while introducing many to a trusted not-for-profit financial institution that has their best interest in mind.”

Bilingual Loan officers from Ascentra Credit Union can schedule a time to do these loans or depending on the time of day, can proceed with the financing the same day of the referral.

“The loans not only make it possible to pay fees over time instead of all at once, making them fit more easily into a budget, but also begin to establish their credit history,” Garnica explained the benefits of working with Ascentra Credit Union.

“In addition, while it is still possible to request a waiver of immigration fees from the government, doing so may be considered a negative factor in determining if a person is likely to become a ‘public charge.’ A loan eliminates the need for a waiver request which may be beneficial in such cases.”

This rule of “public charge” was introduced by the current administration and has created a lot of confusion and misunderstanding among immigrant communities. Everyone talks about the rule, but no one is sure about the meaning of it. Garnica wanted to relay two pieces of important information about this particular rule and another one to anyone who is confused about what all of these means.

She pointed out that it is true that the immigration process has become very difficult in comparison to the past. And she wanted to emphasize two important and specific changes. The first one is Notice to Appear in Immigration Court. This is an important document that can lead to deportation because of a misfiled application. The second one is the “public charge” rule that is causing a lot of fear and immense confusion among immigrants.

“The ‘public charge’ rule, some 400 pages, that looks at individual applications to determine if the applicant has been or might become a ‘public charge’.  The new requirements built into this rule are causing a lot of confusion and fear, resulting in people not receiving benefits they are entitled to out of fear this will prevent them from becoming a legal permanent resident,” Garnica explains. “There are many immigration situations to which the rule does not apply at all, and somewhere it might become a problem.  We would like to help eliminate some of the confusion and fear.”

This “public charge” rule was to take place on Oct. 15, 2019 but five Federal District Courts have ordered that DHS cannot implement and enforce the final rule on the public charge ground of inadmissibility under section 212(a)(4) of the Immigration and Nationality Act. The court orders also postpone the effective date of the final rule until there is final resolution in the cases. Most of the injunctions are nationwide, and prevent USCIS from implementing the rule anywhere in the United States.

“We would like to provide an idea of when an individual really needs to consult an immigration professional before taking action, and who needs not be concerned,” Garnica added.

The immigration process is becoming more difficult each day and that is why it is important to have the advice of experts who know what they are talking about and who can guide immigrants through this arduous process.

It also helps to know that there are financial options through The Newcomers Initiative partnership that help those who may delay their immigration process due to cost. If you are interested in receiving advice and help from the Diocesan Immigration Program, 780 West Central Park Ave, Davenport, Iowa. You can call (563) 324- 1911 to set an appointment which is required since walk-ins are not accepted. Office hours are Monday through Friday 8:00 a.m. – 4:00 p.m.  More information about the Newcomers Initiative can be found at ascentra.org/newcomers or on Facebook @NewcomersInitiative