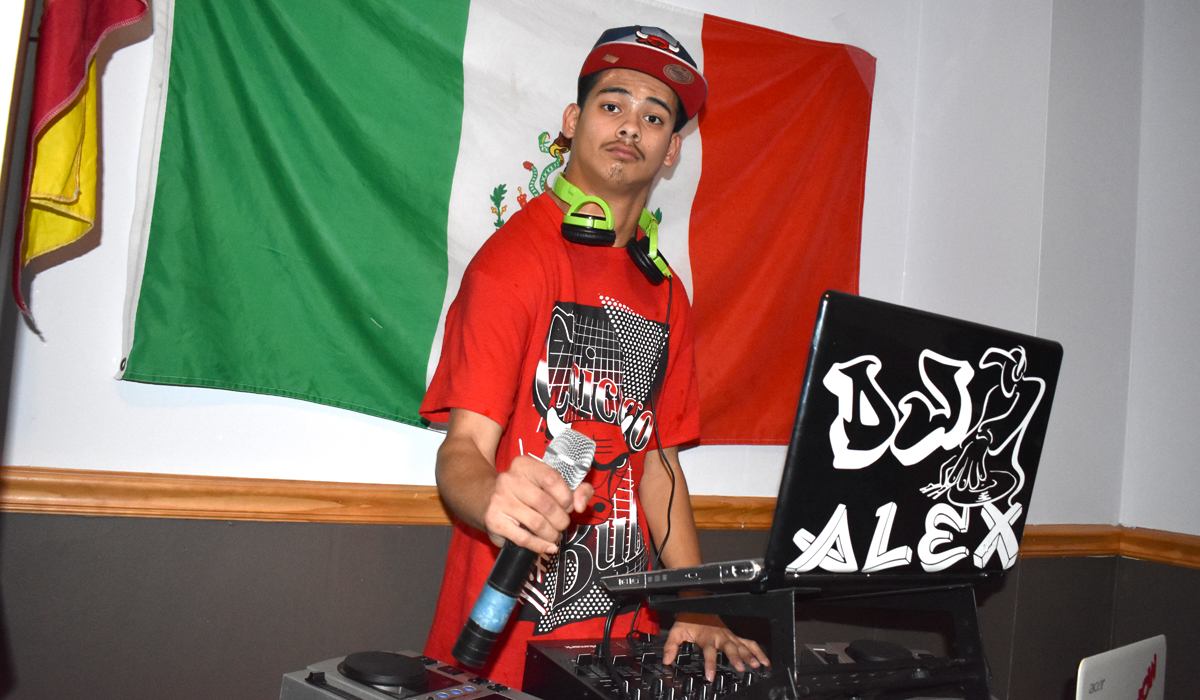 At first he was doing it for fun, but the more he did it, the more he liked it. And now he sees himself doing it for as long as he can. Lenin Alex Lopez is the new DJ in the Quad Cities. And with a cumbia tune in his soul he is dreaming of inspiring others to reach for their dreams.

Lenin Alex Lopez is originally from Morelia, Michoacán, Mexico.  This young man, graduate of Moline High School is suffering from a condition called cerebral palsy, which, by the way, is not an impediment for him, as has recently embarked on a journey towards becoming a successful DJ. (Cerebral Palsy can be described as a group of disorders that affect person’s ability to move).

“Yes, I have cerebral palsy, the lower case, which affects nothing of how I walk, speak or do anything. It’s my movements that are right function with my brain,” Lenin Alex Lopez describes his condition.

Lopez considers himself a friendly person who loves to talk to people. Does his condition affect his daily life; you might ask. Sure, it does, but it does not stop him from working hard for his dreams.

“Yes, it affects me in my daily life because I have to deal with people. I am very outgoing [and] sometimes I worry about it too much, but I have to make something of it,” Lopez said.

Worry or not, it is his love for music what is driving him. Music can be a powerful tool in the hands of people. It can make you happy, sad, or even angry, but it also can be a means of communication with the audience. Lopez believes his speaking through music can change people’s minds.

About two years ago Lopez was browsing the internet and he stumbled onto a DJ program. At a stroke of fate, he downloaded it to his computer. At first, he was just playing with the program and not taking it seriously. After a while he started to enjoy what he was doing. Lopez decided to share his new found passion with his mother.

“I was actually good at it. [I] told my mom about it and she thought the same,” he remembered.

After some time, he realized that he is becoming a pretty good DJ, so he asked his mother if she could tell her coworkers if they wanted Lenin Alex Lopez to play at their children’s parties. The new venture he started was successful and it sure made his mom very proud of her son.

“I did [the parties and] a lot of people asked my mom who was the kid [and] she was like, that’s my son. People did not believe [her],” Lopez shares his experience. After people finally realized that he was in fact his mother’s son, they started to comment that he was doing a great job as a DJ.

“It is challenging a little bit, but I am not worried about it because I think in the DJ industry there are going to be a lot of people making mistakes and a lot of the famous DJs around the QC had told me that too,” Lopez said.

Mistakes are also learning experiences. They might worry Lopez a little, but they do not stop him from achieving his highest potential.

“I think that there is nothing that’s going to stop me now. Now that I started my dream,” he told with pride. “I am planning on helping a lot of people like me around the world to never give up on yourself and tell them that just because you have a disability, it doesn’t make any different and dream your way to a good future.”

The music never stops playing in his soul. He loves it, he breaths it and he talks with others through it. DJ Alex’s passion will make him successful at what he does and he will sure be an inspiration to those who are working hard to achieve their dream. To contact DJ Alex for your next celebration call him or send a text to (309) 292-9690. Look for him in Facebook DJALEXQC or Instagram dj_alex_qc