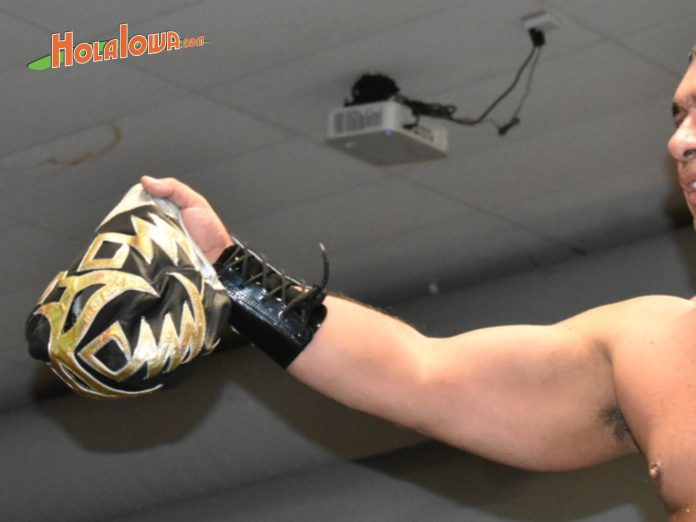 Blue Grass, IA – Tonight, in front of a packed house at SCWPro’s The Harvest, Iowa’s own Luchador Latin Thunder lost his mask to Corn Boi in Iowa’s first Mascara VS Cabellera match.

Latin Thunder’s real name is Juan Fourneau and he lives in Muscatine, IA.

Growing up in Muscatine Iowa to parents of Mexican descent Latin Thunder knew about the world of Lucha Libre from his father Jorge. His dad told him stories of reading comics of El Santo as a child and watching lucha libre in Piedras Negras. “Also when we spent our summer vacations as a family on the Texas border town of Eagle Pass my dad would occasionally watch a Lucha movie that starred Santo, Blue Demon and Mil Mascaras. “

After training for pro wrestling in Dallas Texas and having his first match at the Sportatorium in 1996 Juan (Latin Thunder’s real name) moved back to Muscatine. In the Midwest he traveled all over on the independent wrestling circuit, a minor league for the sport.

After gaining some experience Juan decided to become a bad guy in wrestling. Playing an anti American villain who spoke Spanish to antagonize the fans he was very good at his job, which was to make fans boo him. But at an event where he played the villain he saw a Hispanic family in the audience. Now with a family of his own he felt bad for how his character in wrestling made the family in the audience feel.

He wanted to create an authentic character and being bilingual and Mexican American was a good start. He spent several months deciding on his character’s appearance. “I have my mask, boots and tights all made in Mexico.” He rededicated himself to the gym and added some high flying moves to his repertoire.

For many years the Latin Thunder persona has been a hit with fans, especially young kids. “The masked luchador is a superhero really, that’s how kids look at us. And it’s been great to see so many kids who aren’t even Hispanic love the character. I’m very proud to be bringing something from Mexican culture to small town Iowa and people of all nationalities are enjoying it!”

We wish Latin Thunder the best of luck on his new era as an unmasked luchador.