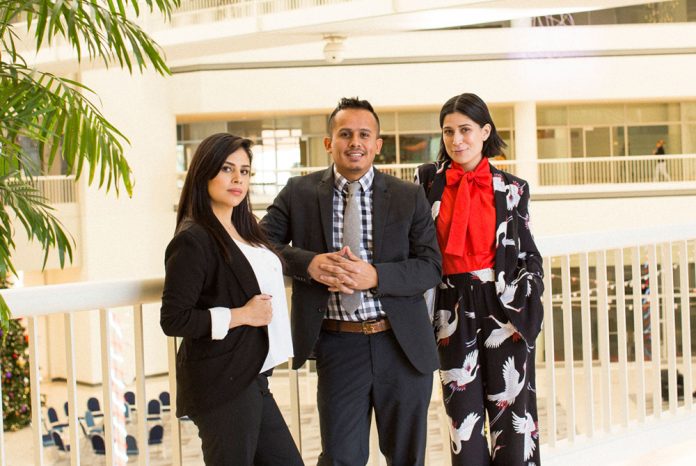 Don’t let his youthful look deceive you, with 16 years’ experience in the human resources field under his belt, Amner Marinez knows all the ins and outs of the staffing industry. After years of working for others, last year Mr. Martinez found the courage to believe in himself and his abilities and launched his own staffing agency called Infinite Resources.

Amner Martinez is originally from Guatemala City, Guatemala. His family immigrated to the United States in 1990. They first came to California, but in 1995 this immigrant family made their way to Perry, Iowa, where Martinez’s parents took jobs at the meatpacking plant. Since then Amner Martinez lived in Iowa. He graduated high school in Iowa, but he never got a chance to go to college. Don’t let his lack of business degree fool you because this immigrant entrepreneur is a force to be reckoned with.

“I have a degree in life,” Amner Martinez laughs when asked about his college education.

He started his career in staffing when he was 23 years old. Over the years in this industry he helped two different staffing agencies to grow their workforce considerably.

“That’s why I decided to go on my own,” Mr. Martinez stated adding that looking at how instrumental he was in helping other staffing agencies succeed in the industry, he realized that he has the abilities and knowledge to run his own successful staffing agency.

In 2019 he took the risk and launched his agency called Infinite Resources where he works with clients and employees looking for jobs, consults, offers leadership training and other services. Over the years in the human resources industry and through building many relations and networking extensively, Mr. Martinez positioned himself as an experienced agent in the staffing industry. When launching his agency, he thought his business can be that bridge between employees looking for jobs and employers in search of the right person to take the jobs. Being Latino makes him also a good representative of the Latino community and helps him engage with this emerging labor force.

“I am Latino,” Amner Martinez said proudly. “I embrace it. I don’t run from it.”

At the end of the day, Mr. Martinez sees himself as an “agent for both sides.” He helps clients to find the best possible fit for an open position and he guides prospective employees through the process and even helps them in salary negotiations. His clients come from a wide range of different industries that include, but not limited to construction, financial, engineering, and healthcare.

Amner Martinez is not just someone who simply runs Infinite Resources staffing agency, this successful immigrant entrepreneur is very involved in the Des Moines community as well. Amner Martinez is co-chair and co-founder of Latino Arts Initiative and a Warren Morrow Latin Music Festival organizer. He stated that when he, along with others, started organizing Warren Morrow Latin Music Festival, it was just a single concert, but over the years thanks to organizers like him this event grew into a huge event that the community enjoys greatly.

In addition to his deep involvement in a community and running his own business, Mr. Martinez also has his own podcast “The Amner Martinez Podcast” where he talks with exciting people from Des Moines community.

Looks can be deceiving. Although this Guatemalan immigrant does not have a fancy degree from an Ivy league school, this does not stop him from achieving his American dream.