After more than three decades full of music Mr. Richard Clark has decided to retire from teaching.  This music teacher influenced and instilled the love for music to many of his students during his long career. In his last 7 years he also ran a widely successful after school music program called the Glenview Mariachi Band.

Mr. Clark has been teaching at Glenview Middle School in East Moline, IL for the past 31 years.

“At Glenview I teach General Classroom Music, Choir and Mariachi Band. I started my teaching career in 1981, earned a Master’s in Arts degree in 1986 and have 35 years public school teaching experience,” Mr. Clark shared his credentials.

He added that he also teaches percussion and music appreciation in Monmouth College, St. Ambrose University and Black Hawk College.

Mr. Clark is known among his students as a teacher who loves music passionately.

“As an educator, my greatest joy has always been to share my passion for music – ALL KINDS OF MUSIC!” Mr. Clark explained how much music means to him. “When a student asks me what is my favorite type of music, my answer is ALL OF IT! I enjoy listening to every genre whether it is a Mariachi Band, a Gregorian Chant, a Russian Balalaika Orchestra or Gamelan music of Indonesia. Each style of music has its importance in music of the world.”

This passionate affection for music was probably the main reason why Mr. Clark didn’t think twice about running the Glenview Mariachi Band. He shared that when Mrs. Margarita Mojica, a bilingual teacher in Glenview Middle School, and Abel Zertuche, a well-known figure in a Hispanic community in the Quad Cities, approached Mr. Clark about launching a music program that would meet the needs of the Hispanic students at Glenview Middle school; he agreed and started the process of creating the Glenview Mariachi Band.

“I spent the remainder of the 2013-14 school year researching Mariachi Music, going to Mariachi Concerts, watching YouTube videos, and emailing members of the Mariachi Heritage Foundation (Chicago, IL), The Chicago Mariachi Project, the Chicago Mariachi Academy and Music Education Consultants Incorporated’s Mariachi Education specialists Marcia Neel & Jose Hernandez,” Mr. Clark told us about how he, who did not know much about mariachi music, got himself informed about this musical genre and got things started for the school music program. “I also found a great resource here in the Quad Cities is at West Music. The West Music Corporation has a Mariachi division which was instrumental in the acquisition of the Mariachi instruments, uniforms and curriculum materials for our program.”

Mr. Clark explained that it was not always easy to run the Glenview Mariachi Band. He had to make agreements with the athletic coaches to make sure that students that participate in both after school programs have a chance to go to biweekly Mariachi Band practices. He also is thankful to people who helped him make all of this possible. In particular Mr. Clark, wanted to express his gratitude to Janet Torres and Jennifer Pickering who were working with students in the violin section, Juan Valtierra and Kris Wingo who took care of the guitar section and Joe Brown and Stephanie Gardner who were assisting with the trumpet section.

Overall, Mr. Clark feels proud of his last 7 years with the Glenview Mariachi Band. He truly believes that this music program gives a wonderful experience to students that otherwise would not have any experience with music.

“The impact to the GMS Music Department has been significant as students from a wide variety of cultural backgrounds have been involved,” Mr. Clark proudly shared his thoughts about how much this music program he was involved in creating has impacted the students of Glenview Middle School. “The Mariachi Band has also instilled a great sense of cultural pride with the Latino students and parents in the program.”

It started as just an after school music program but under Mr. Clark’s great leadership the Glenview Mariachi Band became a regular fixture at many local events and festivals. Mr. Clark said that even he himself was a bit surprised by all the success this music program generated. Under his guidance the kids even performed at the QC Mayor’s benefit and even for students from other school districts all around Quad Cities.

“As I retire, my hope is that this program continues to grow and continues to be a presence within the entire Quad Cities and Latino community,” Mr. Clark stated.

This music teacher is leaving big shoes to fill behind. His retirement is now official and the East Moline School District 37 is in search of someone who can take over the Glenview Mariachi Band. Those who are interested in the position of the Director of Glenview Mariachi Band need to have an Illinois teaching license endorsed for music and have some knowledge of string instruments and Latino culture. Interested persons can call Glenview principal Tracy Anderson at (309) 755-1919 to learn more. 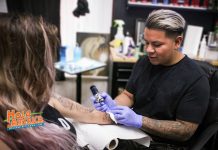