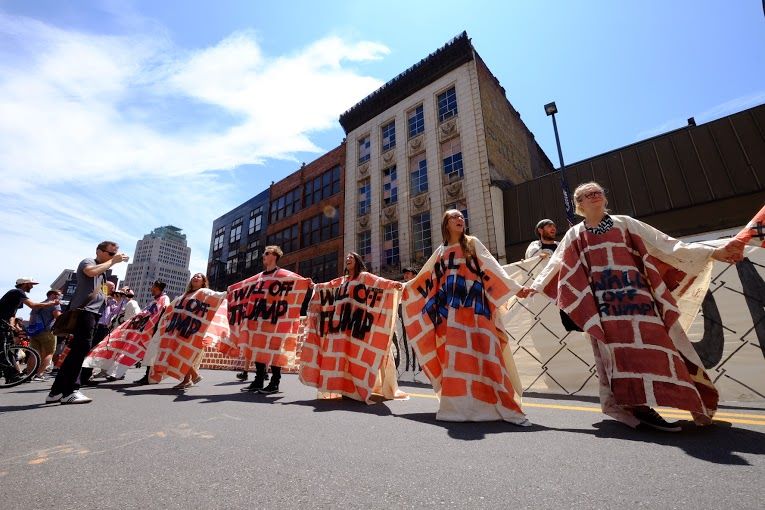 Like an antidote from the hate that radiates from Donald Trump’s proposal to “build a wall” – one of the phrases in the presidential campaign battle coming from the anti immigrant magnate – there is emerging symbolism in another type of wall that was built on the foundation of solidarity to stay safe from his xenophobic rhetoric against the Latino community.
It was in Cleveland, the city that is hosting Republican National Convention, where pro-immigration groups of young people from different states are shaping a different kind of wall made of fabric and painted as if it was made of bricks or metallic fence, the same that was used on Wednesday July 20 around Quicken Loans Arena, place of the Republican National Convention, to show rejection of the divisive millionaire’s proposal. Also, at some places this fabric wall is made to look like brick ponchos with a message “Wall off Trump”, Remy tells us, one of the artists of First Seven Design Labs that participated in this project.

“Through this symbolic way of talking we want to say that our communities need to organize themselves to defend themselves against Trump’s hate and rhetoric,” says Tania Unzueta, from Mijente group, one of the organizers of this pro-immigrant initiative.

“I believe that he is not just dangerous as a candidate, but the fact that this type of viewpoints about immigrant communities can become something normal,” she adds. “Then we would like the message of ‘Wall off Trump’ – protect our communities from Trump – to be applied in the convention with our symbolic wall, as well as in the movement by the people from here on until the elections.”
With this objective the young artists that paint, cut the fabric and unite sections of this long piece of painted bricks, want to symbolize the belonging to the American social fabric, like a part of a society built on foundation of immigrant stories.
For Ramon Aquino from the organization called PUENTE from Arizona, “Trump is someone dangerous because of the things he says. That is why we are doing this, to express our feelings about what is happening in the country.”
Ivan Vargas, a young man of 28 years old eligible for DACA, came from Atlanta, Georgia to participate in this process because, “we are in the middle of a lot of instability, there is a lot of discrimination and when there is a presidential candidate like Trump, that is spreading the hate against minorities, we have to fight it.”