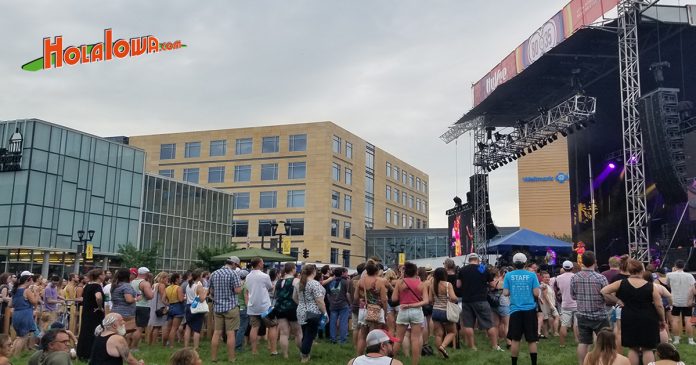 After two years away, the 80/35 Music Festival returns to Des Moines this weekend with an impressive array of performers filling out the line-up.

The two-day music festival kicks off Friday at 5 p.m. with a performance from Guided By Voices on the Hy-Vee Main Stage. The final act of the weekend, Charli XCX, is scheduled to close out the festival at 9:15 p.m. on Saturday.

According to Davis, this year’s event is not only bigger than the last time the festival occurred in 2019 — with more than 50 bands this year — but also has more free performances for attendees.

“!!! (Chk, Chk, Chk) and MonoNeon — they’re both going to put on really fun, really high-energy shows,” said Davis, alluding to two of the performances set to close out the Kum & Go Stage on respective nights. “Both of those are going to be show-stopping performances.”

Because of these free shows, the wide array of genres and the centrality of the Western Gateway Park, Davis is hoping that everyone can find a reason to come out and enjoy the event.

That enjoyment will be made easier with multiple transportation options. The event is offering secure bike valet parking through DSM Street Collective and DART Route 60 is scheduled to extend service through midnight on July 8 and 9 with a designated pick-up location for the festival at the corner of 10th and High streets.

“I really want to stress that there is so much of this festival that is accessible — even people that maybe don’t think of themselves as the festival type will enjoy 80/35,” he said. “We really just want to make it a festival for everybody and bring people out who enjoy live music and may not see themselves in the festival environment.”

Here’s everything you need to know about the shows at this year’s 80/35 Music Festival. Tickets for the event are on sale now with day passes starting at $55 and two-day general admission priced at $95 via 80-35.com.

Between Grand Avenue and Locust Street on 13th Street

5 p.m. — Guided By Voices starts off the festival on the Hy-Vee Main Stage. The indie-rock band hails from Ohio and has produced songs like “Game Of Pricks” and “I Am a Scientist” over the course of nearly four decades of music-making. The group’s latest album, “Tremblers and Goggles by Rank” was released earlier this year.

7 p.m. — The Grammy-nominated indie-pop group Japanese Breakfast is next to take the stage. The decade-old group has released hits like “Boyish” and “Be Sweet.” The group also provided music for the indie-video game “Sable,” released late last year, with a track called “Better the Mask,” which frontwoman Michelle Zauner said was one of her favorite songs she’s ever written in an interview with Slate. Last year also marked the release of the group’s third studio album, “Jubilee.”

9:15 p.m. — Grammy-winning existentialist folk-rock artist Father John Misty arrives to close out Friday. Perhaps best known for his album “I Love You, Honeybear,” he’s been behind songs like “Real Love Baby” and “Chateau Lobby #4 (in C for Two Virgins).” His latest album, “Chloë and the Next 20th Century,” was released early this year.

Between Locust and Walnut streets on 10th Street

Between Locust and Walnut streets on 13th Street

On Locust Street in the Pappajohn Sculpture Park

More:The future of the Val Air Ballroom includes $5 million renovations and ‘a little bit of everything’

Between Grand Avenue and Locust Street on 13th Street

Noon — Kicking off the main stage shows for the day is local hip-hop artist B. Well, the stage name of Des Moines musical artist Billy Weathers. The creator of the B. Well Foundation — which supports after-school programs for kids — opened for famed hip-hop artist Nelly at Horizon Events Center last year.

1:30 p.m. — Following B. Well is Miloe, an indie-pop performer with a focus on lush sonic landscapes. His single, “Floating” was released earlier this year.

3:15 p.m. — Alt-rock band The Envy Corps is next on the schedule. The Ames-based group has put out songs like “Story Problem” and “Make It Stop.” The group released its latest album, “Born in Fog” in May.

5 p.m. — Hailing from Chicago, singer-songwriter Jamila Woods will come to 80/35 to play the Hy-Vee Main Stage as well. Woods is known for songs like “Giovanni” and “Holy.” She lent her voice to rum.gold’s “Aimless EP.” She’s also collaborated with the aforementioned Miloe on the single “Winona.”

7 p.m. — The indie-pop band Future Islands — known for songs like “Black Out Days — Future Islands Remix” done with Phantogram and “Seasons (Waiting on You)” — plays the penultimate performance on the main stage for the night. The group released its single “King of Sweden” earlier this year.

9: 15 p.m. — Grammy-nominated British pop singer Charli XCX, who’s released hits such as “Boom Clap” and “Beg for You,” closes out the festival on Saturday night. Her latest album, “Crash,” was released in March and, according to Davis, this performance marks her first time playing Iowa.

Between Locust and Walnut streets on 10th Street

Between Locust and Walnut streets on 13th Street

On Locust Street in the Pappajohn Sculpture Park

Even kids can find something to do at 80/35. This year from 4 to 7 p.m. Friday and from 1 to 7 p.m. Saturday, kids can participate in free activities such as crafts, face-painting, hula hooping, and more. Find it at 13th Street and Grand Avenue.

Isaac Hamlet covers arts, entertainment and culture at the Des Moines Register. Reach him at [email protected] or 319-600-2124, follow him on Twitter @IsaacHamlet.