Perez to headline May 6 card against undefeated Mangune

There’ll likely be no mystery when Joe Perez steps into the ring on Friday, May 6, at Rhythm City Casino in Davenport for the main event against the undefeated Kevin Taylor Mangune.

Perez, 32, who grew up in East Moline, Ill., and now lives in San Diego, Calif., is all about consistency both inside and outside of the ring.

Good left jab, right cross, left hook, movement. Add heart and determination. Perez has a style that is devoid of drama, more workmanlike and built on a solid foundation.

Perez, 32, has had a career in the pro ranks mixed with both disappointment and success. Once a U.S. Olympic Trials fighter, Perez started his pro career in 2012.

Perhaps a win or two could have moved him toward contender status. Today, he is philosophical and introspective on his career.

“You know, I’ve always had a plan,” Perez says. “The goal was to win a world title. I’ve taken some losses. No manager. No promoter. It’s a tough road. I don’t want to end up becoming a journeyman fighting for paychecks.

“I’m looking at maybe two, three more fights. I enjoy fighting at home here in the Quad-Cities. I’m motivated. My wife and my kids are my biggest supporters. I want to put on a good show, especially when fighting at home in front of the fans. They motivate me. They pay their hard-earned money to watch some good fights.”

Many professional fighters like Perez have a full-time job, they raise a family, they train after work.

“My wife Hannah shares the same dreams as me,” Perez says. “I’m gone most of the day. I leave to train before the kids wake up. Then, I go to work. I train afterwards. Sometimes I’m home when they’re getting ready to go to bed.  She helps them get ready for school, feeds them, helps them with their homework.”

“We came out here grinding together with no support,” Abdullah says. “Joe’s a pioneer for the rest of my fighters. He took the tough road, took chances. I wish I had the connections that I have today. I think his journey would be totally different.”

Abdullah now has a stable of professional fighters, all undefeated, except for Perez.

“Joe Perez sets a lot of standards for my athletes when it comes to work ethic and discipline,” Abdullah says. “They understand his journey.”

Abdullah says he likes what he’s seeing in Perez. A little older, a little wiser, Perez has been battle-tested. He hasn’t lost his motivation, Abdullah says.

“Joe seems to be re-energized,” he says.

Steve VanDeWalle, who was the 1998 U.S. Armed Forces Champion and a top-ranked amateur boxer in the 1990s, was Perez’ first trainer. VandeWalle, who served in the Army and retired from the ring in 1999, was coached by Abdullah with the Army World Class Athlete Program at Fort Carson, Colo.

When he left the military, VanDeWalle started working with youngsters back home in the Quad-Cities. Perez was his first fighter at the age of 9. VanDeWalle will work his corner for the May 6 fight.

“Joe’s done some terrific things in boxing,” VanDeWalle says. “He’s a very intelligent fighter. More than anything, I’m proud of him as a man, father, and a husband. He’s a very dedicated family man. I’m happy to have played a part in that development.”

Perez’ opponent is younger, taller, and has stopped or knocked out five of his six opponents. Mangune realizes Perez is his best opponent. The Chicago boxer understands the significance of the challenge.

“I’m ready to see what I’ve got,” Mangune says. “It’s definitely a different feeling having to go to somebody else’s backyard. But, I’m not worried about it when the fists start flying.”

Perez threw his first jab before he was 10 years old. At 32, he’s still throwing leather and doing it well. There may be an inner voice telling him it has to end sometime, but not now. Not on May 6. 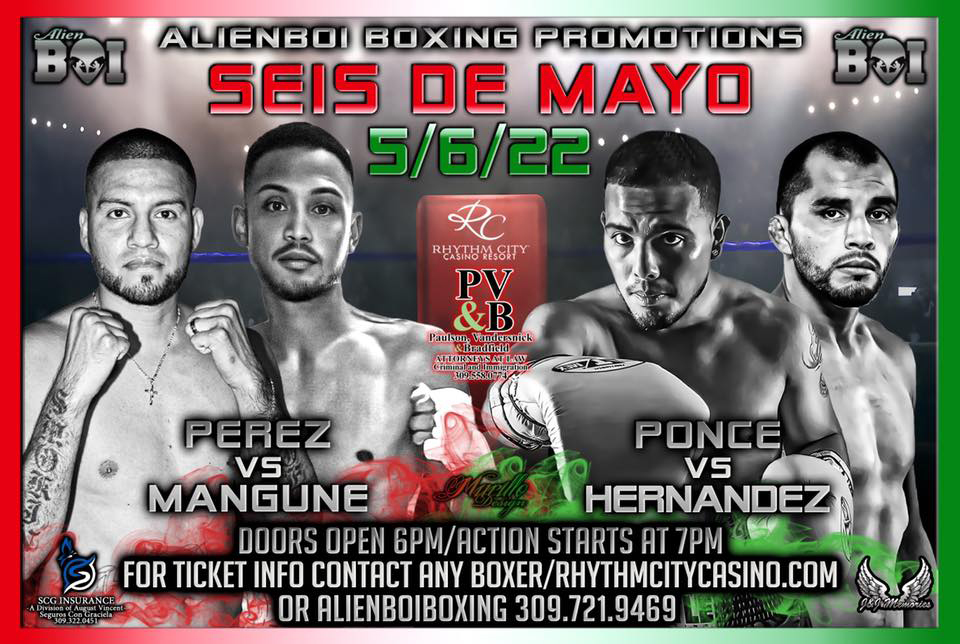