By Anthony Watt, Courtesy of The Dispatch

The 20-year effort to build a new Interstate 74 bridge across the Mississippi River between Moline and Bettendorf is moving into the home stretch, with this season’s work expected to clear the way for construction of the actual bridge to begin in 2017.
The new bridge will run just east of the existing one. It will have two spans, each with four lanes and full shoulders. There also will be a recreation trail and an overlook in the middle. It is expected to open in 2020, with the existing bridge to be demolished in 2021.
Doug Rick, I-74 project manager for the Iowa Department of Transportation, said two related projects underway in Bettendorf are expected to be completed in 2016. They are the switching of U.S. Highway 67 from State Street to the north and the rebuilding of a portion of Kimberly Road.
“That’s the plan — to be done by the end of this year,” he said.
A third 2016 project — the relocation of endangered mussels in the path of the new bridge — is expected this summer, he said.
The total project, including the bridge, realignment of the highway, new ramps and related work between Avenue of the Cities in Moline and 53rd Street in Davenport, is expected to cost $1.2 billion. About $140 million has been spent or committed so far.
The revenue for the project is coming from federal transportation funds that Illinois and Iowa receive each year.
The property acquisition in the Iowa portions of the project area is mostly complete, Mr. Rick said. There are some minor acquisitions that still need done around Lincoln and Middle roads, but they are related to the 2019 phase of the project.
John Wegmeyer, of the Illinois Department of Transportation, said roughly 60 acquisitions were deemed necessary in the Illinois portion of the project area, and about half of them have been made. The remainder range from small strips of land to properties with structures on them.
Here’s the timeline for completing the work:
2016:
• Shift U.S. 67 off Bettendorf’s State Street to a newly built roadway, because the new bridge will cut State Street in two. The goal is to have the work done before December.
• Rebuild Kimberly Road in Bettendorf between the last I-74 Iowa exit and Grant Street to fit the new interchange being created for the bridge. When this phase is completed, Kimberly will be a two-way street down to Grant Street. The work is going on simultaneously with the State Street project, but is expected to be completed before State Street is finished.
• Relocate endangered river mussels from the construction zone. The mussel beds are primarily around Sylvan Slough, though beds in Iowa also must be moved. Where the mussels will be moved still is being worked out.
• No 2016 ramp closures are expected in relation to the replacement project, but some may be necessary for maintenance work on the existing bridge. More details of the maintenance project, being carried out by Illinois, is expected in about a week.
• Demolition of the old train depot in downtown Moline is expected this summer. 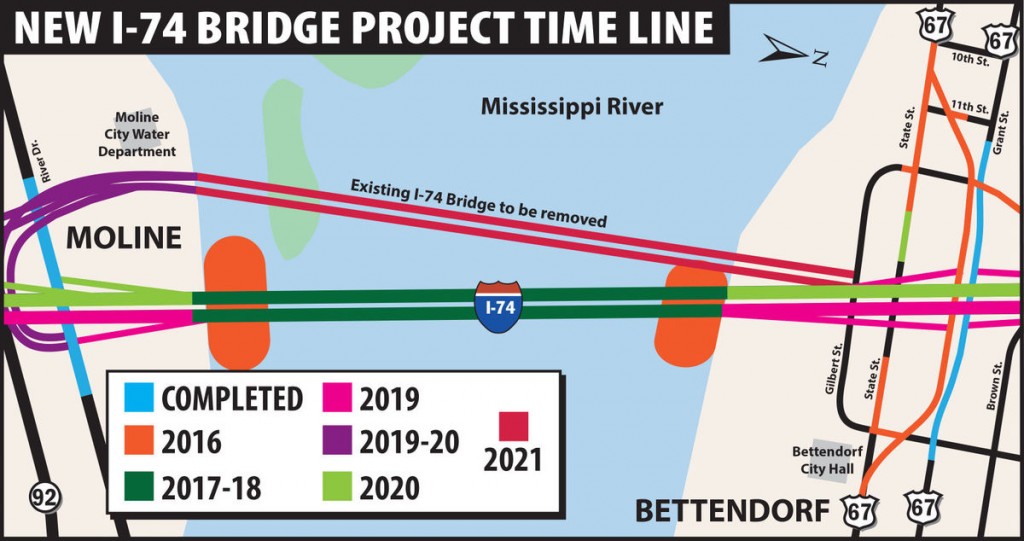 2017-2018:
• Bidding on construction of the new bridge and at least some of the land-based infrastructure work is scheduled in the spring. The full bid schedule for the later phases of the project still is being worked out.
• The main work will be in the Mississippi River beginning in the summer of 2017. Workers will be building the new bridge’s framework.
• Some preparation work will be done to Interstate 74 on land in Illinois and Iowa. Examples include drainage work on the Iowa side and building retaining walls on the Illinois side. The highway will remain open, but lane closures can be expected.
2019:
• The Iowa-bound stretch of Interstate 74 from Avenue of the Cities to Middle Road will be closed for refurbishment and adjustment to fit the new bridge.
— The old bridge itself will remain open, but Iowa-bound motorists will have to exit I-74 at Avenue of the Cities, make their way to downtown Moline and get on the bridge there. In Iowa, they will have to exit at State Street to detour along Kimberly and Middle roads to get back on I-74.
• The Iowa-bound span of the new bridge id expected to be completed by November or December.
2020:
• The remaining Illinois-bound lanes and connections will be refurbished and adjusted to fit the new span.
• The new Illinois-bound span will be completed and opened to traffic. Completion is expected in November or December.
• While these two portions of the project are underway, the Iowa-bound span of the new bridge will be used for two-way traffic.
• The old bridge still will be accessible to local traffic.
• There will be some ramp closures as new ones are built. For example, the final Iowa exit is to be moved, so people will have to get off at Middle Road to reach downtown Bettendorf during parts of this phase.
2021:
With the new bridge operational, the old bridge will be demolished. The work will involve a combination of explosives and the use of machines and crews.